Resources for A Religion of One's Own

Bonuses include:
* A downloadable workbook with the video series.
* Thomas Moore will personally answer participants' questions via email for one week after the video series launch.

Omega Institute shares an excerpt from Thomas Moore's book, A Religion of One's Own titled "Self-Therapy as Care, Not Repair". In the passage Moore lists ways to facilitate your self-care. FREE Registration to watch Moore's panel discussion Meeting Fear with Love recorded Wednesday 13 July 2016 at Omega. This video is available for viewing until October 2016.

Bonnie Bright, graduate of Pacifica Graduate Institute and founder of Depth Psychology Alliance, talks with Thomas Moore in this guest post and 33 minute audio segment: "Spirit, Soul, and the Secular: An Interview with Thomas Moore"

Visit Thomas Moore's Facebook page for A Religion of One's Own: https://www.facebook.com/moorereligionofonesown

December 10, 2015: "A Religion of One's Own develops the idea of a spiritual practice tailored to the individual, immensely appreciative of the spiritual traditions, and both worldly and visionary. All these ideas apply to the Christmas season, which could be seen as a universal celebration of light after darkness, hope, rebirth and a renewed commitment to a meaningful, generous life." WATCH
A Religion of One's Own
Interview by Rose Caiola
Rewire Me
Video: 39 minutes
2015 October 5

". . . now [Moore] believes we are facing an exhilarating new phase of our spiritual evolution. His broad message resonates with those who see themselves as spiritual, not necessarily religious, and he shares with Oprah ways to bring the soul and spirituality back into your life." 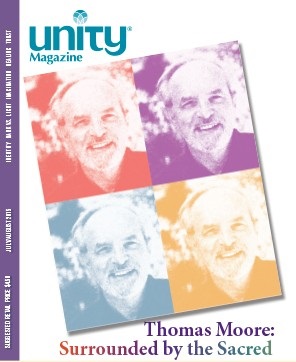 Unity Magazine features "Listening in with Thomas Moore" by Katy Koontz in its July-August 2015 issue.

KK: You suggest incorporating many different spiritual traditions in this religion of one’s own, but you also encourage skepticism. If all these different traditions are indeed a treasure trove, where everything has meaning and is sacred, why is skepticism necessary?

TM: Because the traditions are also full of garbage — every one of them. You’re lucky to get 25 percent of really good stuff out of any of the traditions. Even some of the great people we quote all the time are good about some things and bad about others. Nobody has the whole picture, so you shouldn’t sell your soul to any one tradition. That’s why I think we’re entering a really interesting new era. We’re leaving the time when we become a member or follower of a religion, and now we’re going to use religions as resources — sorting the good from the bad. "

This interview is also available as a pdf file.

Last year authors Thomas Moore and Katrina Kenison were at Christ Church in Exeter NH to talk about cultivating soul in everyday life. Watch their presentation in this 1.5 hour video by AccessTV98.

A Religion of One's Own: Public Talk and Conversation
Thomas Moore's talk from 31 March 2014 at the Garrison Institute is available through academia.edu after free registration.

11 February 2015
Oprah Winfrey Network shares an excerpt from Thomas Moore's new book, A Religion of One's Own:
"Anyone can be a Mystic — Here's How"

Spirtuality and Practice declares Thomas Moore's book A Religion of One's Own: A Guide to Creating a Personal Spirituality in a Secular World to be one of The Best Spiritual Books of 2014. In the list of 50 finalists it aces the Religion category.

Thomas Moore's latest book, A Religion of One's Own: A Guide to Creating a Personal Spirituality in a Secular World (2014) is now available in paperback from Gotham. Moore invites readers to explore with him "the myriad possibilities for creating a personal spiritual life, either inside or outside formal religion, and to develop an inner life of purpose, meaning, and reflection."

In today's emailed newsletter Moore writes, "I draw on insights I gathered during my twelve years as a monk and the much expanded, imaginative spirituality I practice in business, in my life as a writer and in my family."

"Wherever I Turn, You Are There" Spirituality & Health November-December 2014

“Soul is the depth of experience that makes us human and fully in the world. Spirit allows us to transcend, reach toward the infinite, be endlessly creative and find meaning and purpose."

A Religion of One's Own
Interview by Rose Caiola
Rewire Me
Video: 39 minutes
2015 October 5

Interview with Thomas Moore
A Religion of One's Own
Interview by CJ Liu
Fire it Up with CJ
Video: 47 minutes
Wednesday 2 July 2014

The Monadnock Ledger-Transcript publishes Priscilla Morrill's interview with Thomas Moore, "Finding a spiritual home" on Thursday 29 Januay 2015 about the paperback launch of A Religion of One's Own.

Penguin Books shares "A Conversation with Thomas Moore" with the twelve questions offered to book clubs for A Religion of One's Own.

"Thomas Moore on the Soul of Psychotherapy"
by Deborah Kory
psychotherapy. net
June 2014

"A Religion of One’s Own: An interview with Thomas Moore"
Interview by Tim Miejan for The Edge magazine
1 April 2014

Rob Bell, former pastor and friend of Oprah Winfrey, talks with Thomas Moore during Episode 62 of his RobCast, recorded in Los Angeles. Moore talks about A Religion of One's Own and his 2016 projects.
Audio: 45 minutes.
November 2015

Spirituality & Practice: Gallery of 8 Quotes about crafting a personal religion.

BOOK TRAILER VIDEO A Religion of One's Own

REVIEWS
Are you “spiritual but not religious”?
It may be time to create your own religion
Tom Rapsas, Contemplative Journal
18 May 2014

You need to be a member of Barque: Thomas Moore Network to add comments!